As Easy as Herding a Duck


"How do you herd a duck?" is a Google search string I've typed recently, and of course, I found a helpful video on YouTube. What we've learned in the past two weeks as we take the ducks to and from their tractor, is that when frightened, ducks will play-doh themselves through small spaces, get stuck in concrete blocks, huddle in brambles, and veer off under stairwells then shoot out the bottom openings like "Vend-O-Duck."

We've also learned that they have personal kinespheres, just like people do, and once you learn their comfortable space bubble, you can use their flock instincts, and some cooked corn, to get them to go where you want them to (mostly). This morning we had our first real success, getting them out of the brooder in the greenhouse, and outside to the pyramid without any real snags. This is the first morning they are out there early, rather than later, and with any luck, we'll get them into their coop tonight.

A couple of weeks before lockdowns and social distancing began, eight ducklings arrived at our local post office and I got a call from the postmaster, Fran, to come "pick up your box full of chirps." We've been fortunate for the past two months to be preoccupied with ducklings. We were not prepared for the constant stream of care required, or the endless questioning over brooder light wattage, how to build a secure coop, or what kind of grit is needed for their digestion. But I am glad we've had the vast opportunities for creative problem solving while we've been sheltering in place. It's kept our minds and bodies busy.

I've annoyed countless friends with texts of duck pics (for the record, you really need to proofread your text messages when mentioning ducks). I've hounded my friend Howard, the Animal Whisperer, for advice and guidance.

Ducks grow fast. They are messy. They outgrew everything within a few weeks, and we lost two of them (Moonlight and The Undertoad). They've spent the past few weeks growing in a brooder made out of a livestock waterer, in a corner of the warm greenhouse.

We began to build a coop with supplies picked up, and later had delivered, the chicken wire and two by fours piling up outside our house. We researched, and planned, and neither of us has carpentry skills or any particular spatial genius. We ended up with what I call "Patchy Milatchy," or "The Duck Bunker," or "The Quack Shack." 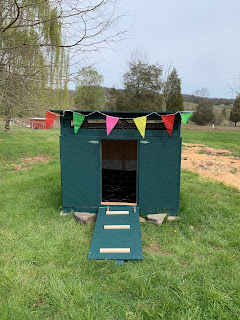 The whole build was a "it's a learning experience!" of problems overcome with ah-ha solutions. One I applied yesterday. A couple of screws were poking out of the walk-up side of the ramp, so at Dan's suggestion, I grabbed a couple of wine corks and screwed them on. Ingenious.

The coop has to be weasel proof, and it is, we hope. It is so tightly built, that when the wood swells during rainy weather, the door is difficult to shut. It's do-able, and then locked down with two sliding hasps. 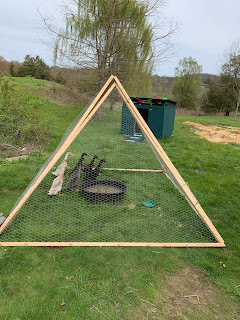 We also built a "duck tractor," a moveable safe haven for them to be in while we're not out on the property with them. It's a pyramid, because that was the easiest to build with the materials we had, and also Dan's idea.

I'm not sure what would be out there for them if I was left to my own devices to build something. I found myself outside this week on a sunny day, snagged in a curl of poultry netting, with a handful of those jabby fenceposts at my feet, trying to envision a duck run with the materials we had left over. I gave up. So for now, the ducks will move from their coop to the tractor, or out onto the pond.

My next search string for Google is, "How do you get ducks to come in from swimming on the pond?"