There will be wine, cheese, and crackers, too.

Curated and with an introduction by Boog City editor David Kirschenbaum
Posted by Jenny Hill at 6:43 AM No comments: 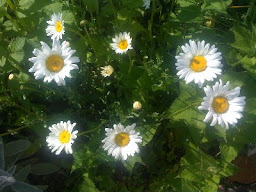 I wrote another short play which I'm going to shuffle into the twelve cards of other short plays I've written recently to see what kind of hand it creates. A winner? A trump? A flush? I fold? Who knows. That's the fun part.

Yesterday, riding my bike home from the grocery I saw gypsy moth caterpillars crossing the tarmac like furry little tour buses. They are pests. I know this well - I've seen bald summers for all their appetites, but I still can't bring myself to push a bike tire over one of them.

Oh, the scents of backyard barbecues this weekend! A waft of toasted marshmallow and grilled hamburger. Laundry on the line, filtering the sunshine. Children laughing. Later, I'll make my grandmother's potato salad, in the same bowl she used for it. The best ever.
Posted by Jenny Hill at 8:17 AM 2 comments:

I enjoy cooking when it's a challenge. Today I decided to see what I could make with ingredients I already had in the pantry. This is what I ended up with - something Mediterranean in spirit, with morels. 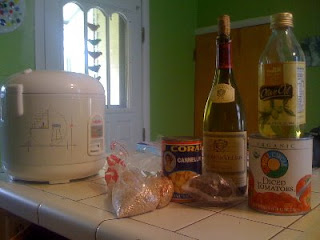 Warm up olive oil and garlic in large saucepan/pot. Add chicken and a generous glug of red wine. Hum a little! You're on your way to dinner...

Get the brown rice started in a rice cooker.

Let the chicken cook a little on low with the pot covered. Flip it over, tend to its needs. You don't want it to get rubbery or burn, or end up on a therapist's couch calling you names twenty years from now. Add the morels, and a little more wine. Cover again. When the morels are hydrated, take them out and sit aside. Add the tomatoes, spinach. Cover. Let the chicken cook all the way, bubble bubble bubble. 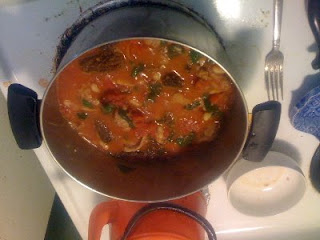 Add the white beans, and return the morels to the mix. Serve over the brown rice. A side salad is a good, greeny pairing. Of course, wine to drink is nice too, if you have any leftover you big lush! Is that you still humming? Yeah, no more wine for you.
Posted by Jenny Hill at 5:44 PM 3 comments: 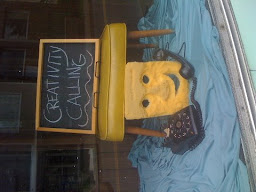 Sometimes we have to work with what we've got for the storefront window of the studio. This is this week's offering - a half finished foam mask, an old phone, and an urgent message written on a kid's chalkboard. Next week I'll start spending more time at the studio - daytime hours. I'm gearing up for that. 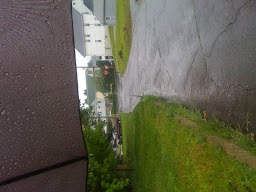 I took a rainy, soggy walk to the Main Bike World today to pick up my new bike. I overshot the walk by about eight extra blocks because I was scouting out the back roads that would make a good bike route. By the time I got to the store, my pants were soaked, and my umbrella was about as helpful as a curtain of tissue paper draped over my head. 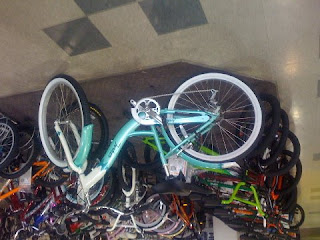 This is my sweet new ride to the studio. It's a good bike for trekking around town. Nothing fancy. I got a little wire basket for the front of it. Less gas use, plus up and downhill exercise is going to be really good for me this summer. The guys at Main Bike were genuinely surprised that I'd be riding home in the rain. If I saved the bike for just the sunny days then I'd hardly enjoy all it has to offer. The rain felt really good on my face and I couldn't help but smile while riding home. 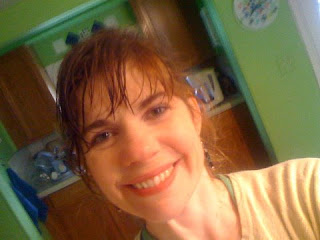 No poems for today, but we're going to have some imaginative fun in the classroom. Today I'm going to have the kids work in groups. Each group will get an object and each person will take on a role:

The Historian
The Scientist
The Advertising Executive

Name the object. Decide where it came from, or how it was invented. Describe specifically how it works and what it does. Will it improve lives? If so, how? Write a 30 second commercial for your object. This ad will air on TV. Create a jingle, a rhyme or a one line slogan that will feature in your ad.

When all three have contributed to the project, they will come up to the stage area and explain their findings as if being interviewed at a press conference. The class will have a couple of minutes to ask questions like the press. When that's over, the group can perform their commercial.

I think this is a multi-level idea here. The ad, the press conference. A letter could be written from the point of view of one of the customers or users of the object. Drawings could be made of how it's parts are made and what it takes to put it together. If the object is something from the past, newly dug up and discovered, drawings of the site, bios of the "Archeologists," findings could be recorded. Ads could be performed and videotaped. A website for the new discoveries, or a book of all their writing and drawing could be created. Fun, fun, fun. This was the sort of stuff I really loved as a kid. It's great to relive it.

Hungry for ideas? Go to the Idea Factory.
Posted by Jenny Hill at 7:07 AM No comments:

Raising Your Hand to Sink Lower in Your Chair

Seventh grade history was a class of shame. That was the year I raised my hand to the question, "Who in here isn't Christian?" (A question that today would get a public school teacher fired, or at least kicked out of the coffee clatch). When called on by the teacher, I chirped that I was Protestant. He put his head in his hands and shook it back and forth. I remember the brown pants he was wearing. I can recall the dandruff on the back of a classmate's head. The air in the room was like when a cloud passes over the sun. I sank that day, and spent most of my year in fear of him. His hands were like a gorilla's. He'd hulk between the aisles of our desks while we were taking a test, slow heavy steps, and stop to lean on any student's desk who wasn't answering up to his expectations. "You know number seven. Think harder." He pushed and demanded.

In eleventh grade, I had his brother as my AP European History teacher. He had the same stature, one that demanded respect or tickled the fight or flight response in his student's brains. I remember him asking me if I was a better piano player than my friend Lynn, who was seated right next to me at the time. He was looking for conflict, which I thought was strange, since a few days earlier he told us something I have never forgotten:

Another reason to sink lower in my chair. As a writer, I like gossip. It's not about spreading it, but hearing it. I love to read tabloids in the supermarket aisles, browse the articles in the cheapest of magazines. I eavesdrop on stranger's conversations. Helen gets sick of me asking her "Any good dirt today at school?" Her friend always used to say "You know I don't like the gossip, but..." and she'd launch into some delicious account of a classmate's conflict. It's not about passing judgment, which is what I think my history teacher's reminder was (he was, after all, working with teenagers). Hearing a good bit of gossip is about catching a delicious idea for plot. It's about the complexities of human nature. Maybe it's the small mind that just talks about people and a medium sized mind that sits and listens and takes notes, then the muscular mind takes those scraps and turns them into something worth reading.

Here's my revision of my history teacher's two-line admonition:

Great minds can figure out a way to justify their gossip-mongering ways.

Just kidding. Really. How about this instead:

Great minds think and then create something from that thought.
Small minds watch television.
Posted by Jenny Hill at 8:21 AM 4 comments: