No Answers, Only Questions 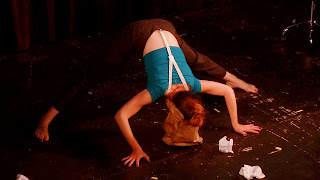 It’s ok to not know where you’re going. Say yes. Action is greater than laughter. You are playing. Believe that you have something to say that is worthwhile.

These are all words of encouragement and reminders that I wrote for myself, and taped them to the window above my desk where I see them daily. The post-its are starting to block out the tree and the squirrels that entertain me with their acrobatics. Any more personal pep talks and I'll completely block out the backyard. I’m in the process of rebuilding a show, Alonely, for a performance at the Ware Center in early March. It is tempting to say what the show is all about, to sum it up neatly in a pithy paragraph, but since it is shape-shifting like a Berserker, I really can’t. If pressured, I would say say it is about the creative process.

Yesterday a friend and I discussed the complexities of describing our art forms. She and her husband are puppeteers and filmmakers, builders of magical worlds that entertain kids and adult alike. See, even those words miss the mark of the vast landscape of all that she and her husband create.

When people ask what I do, I say I am a performer and a poet, and I tend to avoid the word clowning because it conjures Pennywise (thanks, Hollywood, for all the coulrophobia), and there is no way to describe how the things I create converge. If I do bring up clowning, and follow it with “not the birthday party kind of clown,” I am passively (and rudely) suggesting that all the birthday party clowns out there aren’t doing worthwhile work, and still leaving a giant blank in the inquirer’s head as to what sort of clowning I do. What do I say? European clowning? Mime? Not really. Each time I try to give someone an answer about what I do for a living, I feel like I’ve been given opportunity for a free line throw to the basket, and each time I try to make the shot, the ball morphs into gelatin in my hands. Cue the trombone's iconic wah-wah.

What I want most is to be an honest person, and I create from that. It’s a messy place, not knowing where you’re headed. It’s scary, even. Yesterday I spent several hours in my living room with my set and props, words and movement, and I woke up from my trance under the watchful gaze of a plastic Viking helmet. Berserker, indeed.

I am playing, and I don’t know where I’m headed, and that is uncomfortable. I am in a constant state of discomfit, trying, really trying, to get at a message that is worthwhile, that makes a connection.

I seek to build connections and relationships, to add some beauty to the world. Let's leave it at that. Maybe that's enough.