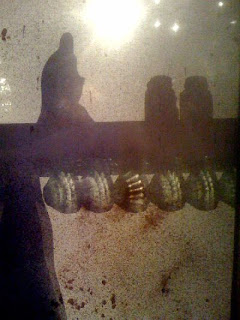 I can't think of a better way to start of a new year than the multi-sensory learning experience of working in the theatre. The past two months have been spent in a state of semi-realism; a shadowy backdrop of dances, memorized dialogues that suddenly snapped together into meaningful conversations, and objects that waited for the energy of hands. Last night was the final performance of Gaslight Theatre's "Dancing at Lughnasa" by Brian Friel. I played the eldest of the Mundy sisters, Kate. What thrills me about theatre is the transience of it all -- the little realities that we create and then strike. I developed a routine for six evenings that fit around the set and the timing of each performance that included time in front of a lit mirror to put on makeup and pin my hair into a style of the late-1930's, the drinking of copious amounts of water, laughter with the rest of my sisters in the cast and the practicing of dialect with them, a trip around the set to check props, and sweaty-handed prayer and notes in the hallway. Between acts, I had a path to get from the set to the dressing room (for more water and face powder) and back again -- a very real, but very temporary routine. Backstage, I rolled my shoulders back, tilted my head like an accipiter, and firmed up my jaw to get into character. I lifted two noisy shopping bags at the exact same time every night when the stage creaked under another actor's footsteps. Kate's character will remain the same on the page, but will be played differently by every actor who has the opportunity. Now the parts of me that were taken over by Kate drift off like the last few notes of a waltz. It's time now to say goodnight.

I quietly dedicated every one of my performances to my father and grandmothers. When it was time for Kate to cry at the end of the second act during Michael's monologue, it wasn't difficult.
Posted by Jenny Hill at 6:59 AM