One Shovel for Two Feet of Snow 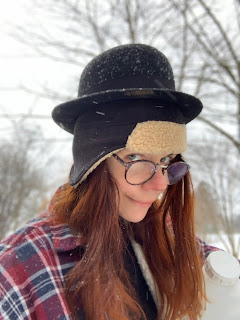 I imagine our neighbors observe us with an air of detached bemusement since we first appeared here. It's obvious we are learning as we go. One of our first challenges was poison ivy, so we "solved" that problem with goats. We adopted two brothers, wethers, so there'd be no musky territorialism. A shed was built, and electric fencing purchased so we could move their paddock around the property with relative ease as they performed their landscape management magic. Goats eat poison ivy, among other unwanted scrub, and they keep the land well fertilized. They are also sweet dunderheads, both stubborn and gentle. They follow me everywhere, love to be petted, are addicted to saltines, and want only to play and eat. Two toddlers with hooves and reptile eyes, with the combined spirits of dogs and horses.

This week we had the heaviest snowfall in several years, with two feet spreading out over the land like a weighted blanket. It was lovely, ah, a fire in the fireplace, soup burbling on the stove. But wait, the water buckets are frozen, I can't get to the paddock easily, the duck run roof is sagging ...

We made a trip out the day before the storm to pick up a few needed groceries, and livestock feed. Dan fixed the problem of the icy water buckets with the purchase of a heated bucket and a long extension cord we could run from the barn.

But we forgot an extra shovel, and found ourselves taking turns with the one shovel we have for snow, digging our way out to the cars, around the house, to the duck run and pond, and I finally made my way to the goat paddock.

Littleface and Brick watched as I shoveled my way towards them. They stood at the edge of the electric fencing, chewing their cuds like two men at a gas station might stand around with their coffees, observing the customers at the pumps. I imagined them thinking the phrase "humans and their constant toil," as I took breaks.

When I arrived, I took some time to play with them, since the day and a half of snowfall kept us from our usual playtime. We trudged to the rock by the road and the Rainbow Tomatoes sign, and they hopped up to get petted, pushed into my chest with their stubborn heads for a hug, and hopped off sideways like springy circus artists.

The snow buried the ground lines of the fencing. The battery was brought inside to recharge, but to no avail. The goats wanted to play, and now that I had a cleared path to the house for them, and there was no working fence to stop them, my afternoon went like this:

Rinse and repeat, three times. I never did have the tea. The kettle just kept brewing. But when dusk arrived, they appeared to be over the escape acts.

The next morning, yesterday, as I went through the usual rounds of breaking the ice on the pond for the ducks, I was joined by the goats, who had no reason to stay inside their useless toy fence.

They followed me to the kitchen porch where they lingered, expecting to be let in for some scones, cocking their heads with curiosity as the windchimes were frisked by a breeze. It was charming, but we had a problem. That fence does not work in the winter.

Solutions were tossed around. I missed an important meeting with a mentor, and hastily texted her my wild excuse with a photo of a goat at the kitchen door.

I've never seen Dan look so wild-eyed as after the last round of getting those goats into their new place for the next few days while we wait for a fence tester.

What do we think we're doing here? Poison ivy - goats - bad fence - elephants next? I don't know what's next. Probably building a permanent paddock space for the winter months.