Emoting Into the Void 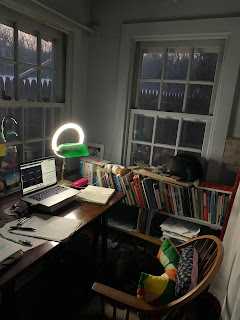 On Friday evening I joined in the Creative Works f Lancaster's production of The 24 Hr. Plays, as actors, directors, and playwrights took on the challenges of creating a full scale online production -- from script to finished performance, in just a day. I participated a few years ago as a playwright. It was more than challenging. I wrote a physical theatre piece about memory, and it was lauded as the "weirdest" in the lineup. For a piece about memory loss, it was memorable. I  remember I drank too much coffee, watched a blinking cursor on a blank Word doc for several hours, and shared a physical space, a cozy writing room, with other writers who tapped away at their keyboards. "No big deal!" their flowing typing seemed to say. I felt supported by their shared presence in the space though, warm, convivial, and enlivened by the omnipresent deadline.

This year, everything was online, obviously, and The Creative Works team really did an excellent job of orchestrating a very complex production from start to finish. Generous in spirit, and organized, they tackled the tasks of technical details, making sure actors, directors, and playwrights had what they needed in place to work, and followed through "backstage" on what was probably a very long list of last minute surprises that no one even noticed. Backstage work often goes under-appreciated. It's the spinal column of the body that is theatre.

The playwrights had an extra layer of challenge in writing for the Google Meet platform. Directors had the extra layer of directing actors who were in different locations. Actors (this one, at least), were challenged by having to learn lines without the luxury of being in the same physical space as the other actors, with no set other than the imagined, or green screened. 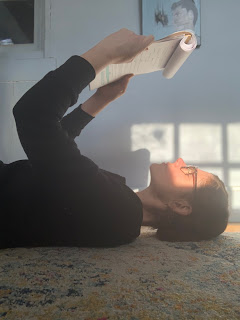 Introductions on Friday night scratched the surface (we had two minutes or less to share) of talents, interests, and ability. What was most interesting was how everyone revealed anxieties, vulnerabilities, emptiness, grief, and the realities of living in a pandemic. The ache for human connection was present. Many of the props people shared were weapons of some sort or another, or they were totems of security and comfort. I shared an antler.

I really enjoyed the full day immersed in rehearsing, of getting to the intentions behind certain aspects of the play with a group of actors and a director, and working out ideas together. I've missed that kind of artistic collaboration. Each play was rehearsed in separate Google Meet spaces, with members of the Creative Works team popping in from time to time to check on progress and see if there were any needs among the group.

Blocking was minimal. I touched a wall no one else saw, I dashed offscreen when an alarm sounded, I reappeared during another character's rant, I reached for and "took" a key from another character -- a trick of timing, props, and camera.

The director gave me the suggestion of taking on a "cross between a Siri and a Hal like voice," for a couple of scenes, and I really enjoyed doing that disembodied voice a lot, experimenting with it, feeling the rise and punctual fall of the diaphragm as I said the lines.

The shows were broadcast live through YouTube, and connected by an emcee who rose to the challenge of delivering cheerful energy to an unresponsive camera.

After my show was over, I watched the others from the TV in our living room, then when it was time for curtain call, I returned to my galley theatre space alone.

Curtain call was a separate Google Meet room, a muted green room full of searching faces. There was a moment where we all waved. A few kindnesses were shared in the chat. Then it was all over.

I took a few steps from the theatre and into the kitchen to find dinner.

During the Friday evening introductions, several actors said something like, "It's so strange not being able to see myself here." In Spotlight mode with Google Meet, you don't see yourself at all as you speak. You deliver into the void. I wondered if we've all become so accustomed to having a mirror of a screen in front of us (Zoom shows you your face unless you tell it otherwise) that it was now a novelty to not have the reflection of our own faces as a focal point.

I think what everyone was really saying was, "It's so strange not seeing anyone else out there,  responding to what I am doing." An expression of longing.