I'm a poet. Is it worth taxing me? Well the government sure thinks so. Must be all those political poems I'm writing and distributing. Every year I put off the inevitable - adding up all the pathetic figures from my freelance poeming that lead to calling myself "self-employed." It's an awful lot of work to keep track of every single cent when every single cent doesn't add up to all that much, and then to be taxed on it further...well, it makes me scrunch up my face like a dehydrated apple. I know that all my taxes more than likely won't go into filling potholes or creating playgrounds. This makes me even more scrunchy.

So the yearly schedule of procrastination works this way:


Today the unveiling of this past year's income and expenses began with opening everything. 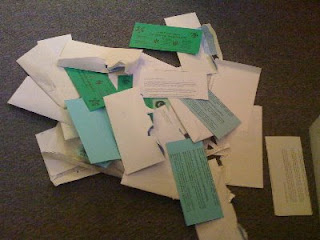 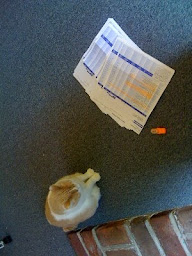 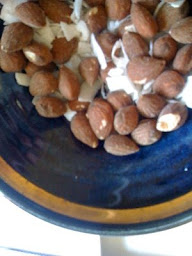 Today is another day of deductibles, but I hope to spend only a focused few hours on it before it's done and I can go outside and play. Ultimately, who cares? I made under 25K, I will likely owe about 2K, and the world will not stop turning as a result of any of the paperwork or whining.
Posted by Jenny Hill at 10:29 AM