It's Not Me It's You

Yesterday we took a trip to Philadelphia to see some live art at the Philly Fringe Festival. A lot of the shows we wanted to see had high ticket prices ($30), but we were able to find something on the schedule that looked interesting and was friendly to our wallets (free). It's Not Me It's You, by Mayumi Ishino was scheduled for 5 p.m. and was located "on the sidewalk of 3rd Street between Arch and Market," according to the website. So, after an afternoon of touring the Magic Gardens and buying too many pairs of shoes on South Street at Dude's, we found our way to the aforementioned sidewalk. It was one of those bright blue days that shoot through your veins, the air was cool, the bass was turned up in the music of passing cars, and our spirits were high.

At the end of 3rd Street near Arch, in a gated alcove was an installation titled "Emergence," by a potter named Dennis Ritter. A coil of white birds suspended on strings flew up from the ground and into the afternoon patches of light. We stopped to take some photos. 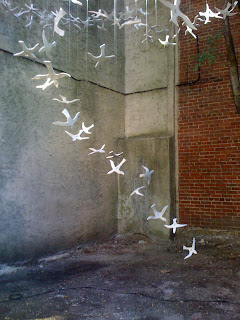 Mayumi helped her darkly-clad partner on with his black hat and face covering, and then she placed a mirror in his hands and took out a bouquet of colored Sharpie markers. She started a drawing of a self-portrait on the mirror. Soul music poured from a nearby shop. A truck turning into the alley where the crowd stood, paused so the driver could have a peek and wonder. By the time the first drawing was complete, the woman with the banana in the audience had worked her way down to the empty peel. A man turning down the alley stopped his car, got out, and stood for a few moments to catch the scene before returning to his confused passenger. 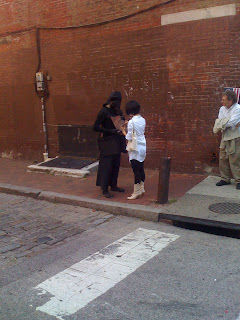 Mayumi finished the drawing, tucked the Sharpies back into her fabric bag, and took out a hammer. The entire crowd took a couple of steps back. She swung the hammer back and thwacked the mirror while her partner still held it. The resulting crack in her careful portrait made a perfect web. 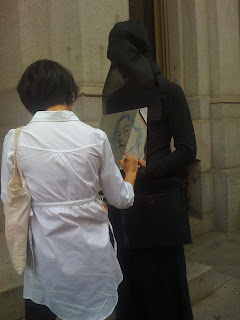 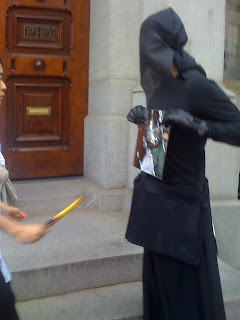 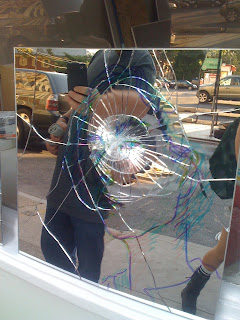 The two performers walked down the sidewalk and we followed, and they repeated the same performance - studied portraiture in Sharpie, sudden hammering, packing up and heading to a new destination on the sidewalk. Passerby stopped with their Chinese food containers. A murder of meatheads in football jerseys stopped farther down the sidewalk to say "just a bunch of magic markers." My brother made his presence known to them by saluting a subtle finger and they hulked away. A little girl and boy, breathless from a chase down 3rd Street, stopped near the alley where Mayumi had set up for her latest drawing, panted and watched, then continued their play.

The resulting broken portraits were as haunting as the crowds that formed to see them created. I saw in it the American fracture of self.
Posted by Jenny Hill at 8:13 AM